I didn’t get a chance to upload photos like I promised, but hopefully I’ll be able to get to them this weekend.  As for last weekend…I spent a lot of time re-organizing everything in my life, scouring cookbooks for a few meals and cooking up a few dishes to share with all of you.

I picked up the new Samsung Galaxy S5 Active and I have to say the picture quality is incredible.  It’s better than any camera I’ve used to date, so all of the pictures you’ll find in this post were taken from the new camera phone.

So let’s get started… 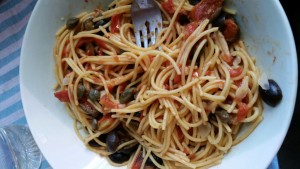 This is my favorite Italian dish to make.  It’s simple and the flavor definitely fuels the soul.  I always go back to this recipe when I want to make this dish.  It’s a relatively fast and easy dish to toss together, especially on a weeknight.

For me, this is comfort food.

I usually stray from completing a recipe word for word, but this version I stick to every single time.  The only thing I did differently was use gluten free spaghetti from Sam Mills.  It comes out just like regular spaghetti does.

For those who try to use gluten free pasta, make sure to rinse off the noodles after cooking to get the ‘slime’ off of it.  I always think the pasta didn’t turn out correctly when I pull the colander from the pot.  But rest assured…after you rinse it off with water it looks like regular pasta.  {Technically, you’re supposed to rinse pasta off with water after it’s done cooking.  No matter what kind of pasta you use.}

In the Crockpot: Beef and Carrot Ragu

I wanted to make sure I tried a slow cooker recipe this weekend, so I found one from Better Homes & Gardens for Beef & Carrot Ragu.

Because there was a horrible storm last Thursday, I wasn’t able to get to the grocery store as planned, so I had to make due with whatever ‘beef’ I had in the freezer.  It ended up being a Beef Shank.

I had taken a nap Saturday afternoon and was awakened to the smells of the wine in the ragu sauce.  I got out of bed to see how the dish was coming along and it looked perfect.

After the meat was thoroughly cooked, I took out the shank portions and cut it up into bite sized pieces and put it back into the pot.  I stirred in some pasta, added some parmesan and red pepper flakes and was amazed that something this good could come from a crockpot.

I love the Olive Garden version of the Zuppa Toscana.  I’ve made this recipe several times and discovered that what I don’t like about it at home was the Italian sausage. So I took the sausage out of the recipe and only made it with the bacon.

I used fresh kale that I picked up from the farmer’s market the day before.  I always buy kale and end up throwing it out because I don’t know what to do with it even though I know I should eat it because it’s good for me.  The only real use I’ve gotten out of it (that I enjoy) is in the zuppa toscana.  It’s a good way to trick yourself into eating something that’s actually good for you.

One of the best recipes I had to memorize on the spot came from a farmer at my local farmer’s market.  This version of Eggplant Parm is the way he likes this dish.  Since I couldn’t remember the farmer’s recipe very well because he gave it to me two years ago (and I’ve had some memory problems post-op), I decided to use Lidia Bastianich’s recipe.  Of course, I did it differently!

She goes on to bake it and add the cheese, etc.  That’s where she and the farmer differ in how they like their eggplant parm.  Let’s just say he likes the dairy-free, simple version, and I agree with him on that!

Follow Lidia’s recipe up until you’ve taken the pieces out of the frying pan.  That’s all you’re doing with the eggplant.

After the sauce is done, pour it over a few pieces of the eggplant and serve.  You can add shaved parmesan on top, or without.  Personally, I think it’s best without.

Other alternative versions are: 1) you can add the grated parmesan to the breadcrumbs when you’re prepping the eggplant to fry, or 2) add a slice of mozzarella and layer it with the eggplant, topping it with marinara and a sprig of basil.

Keep in mind that this recipe takes more than an hour to make because the eggplant needs to be placed in salt water and then drained for an hour.

To clean the palate, I suggest having a caprese salad. {From Capri Island}

A caprese salad is very easy to throw together.  All you need is fresh basil, tomatoes and mozzarella.  I read this article recently on dressing an Italian salad and she put it perfectly.

Whomever salts the salad should be a wise person; whomever pours the vinegar should be stingy; and whomever adds the oil should be generous. Really, that tells you all you need to know about the ratios to use—no one in Italy ever uses measuring cups or spoons to make a salad dressing!

Keeping that philosophy in mind, I added a pinch of salt, some ground pepper, a little bit of balsamic vinegar and some olive oil.  All I can say is that it was the best caprese salad I’ve ever had.

When it comes to Italian dressings, I highly recommend reading that article.  It’s very enlightening.

Dessert: The Only Thing You Must Have Every Single Day in Italy

I have one rule when I’m in Italy.  I must have a gelato every single day.  I only get the mint or the mint with chocolate chips.  It’s really the only type of ‘ice cream’ I love (besides butter pecan).

I’ve never had a bad or sub-par gelato in Italy.  I’ve had one in Venice, Bologna, Florence, Rome, Naples, Sorrento, Positano, Milan and Verona.  It’s an experience I will never forget…especially the one in Florence.  There were so many shops serving up gelatos…I was in heaven.

In America, gelatos are becoming trendier…meaning…you can find it at the grocery store much easier than before.  Talenti is one of my favorite brands for gelato…but keep in mind that Talenti is actually an Argentinian version of gelato, not Italian!  Talenti is actually named after the Florentine that invented gelato: Bernardo Buontalenti.

No wonder why the gelato was so much better in Florence…that’s where it was invented!

So this month, I’ll be trying out the various versions of gelato out there on the market (you know…the mint chocolate chip version).  Maybe I’ll find one that will remind me of Florence again.  Or maybe I’ll just have to go back and have a proper gelato.  Or learn to make it myself…nah…I’d rather go back to Florence.  It’s one of my favorite places to be in Italy.

Now off to workout.  If this is Italian month and there’s a lot of pasta involved, that means there are a lot of workouts in my future!