The challenge for every foodie or individual that wants to be a master cook is to find a unique recipe that makes you savor the moment of ecstasy when you take that first bite.  The most amazing recipes I uncovered last weekend were a bit of a surprise to me.  As in, I wasn’t expecting much from it because of all of the food I was cooking up.  But it happened in that one moment as I went from one dish to the next, tasting each one…this was beyond amazing.

These recipes I am going to share today were all items that I never made or tried before.  I didn’t know what to expect when I made them.  All I can say was that I was pleasantly surprised. 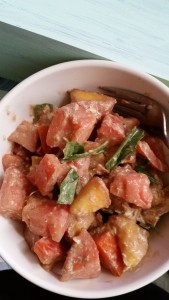 The recipe follows almost exactly to the last detail of the Caprese salad, BUT you add peaches and you use Burrata cheese.

Burrata cheese can be found next to the fresh mozzarella in your grocer’s aisle.  It’s almost identical to mozzarella, but more unique.  The outside is like a mozzarella ball, but when you cut it open it oozes out like it was stuffed with ricotta cheese.

For presentation purposes, you may want to put the ball of Burrata on a plate with the salad mixture surrounding it, drizzling the balsamic reduction over it.

Or you can do like I did which was to mix all of the ingredients together.

After I took my first bite, I was surprised at how wonderful, light and refreshing this salad was on a hot summer day.  It’s very simple to make and only requires 5 ingredients.

You can find the recipe HERE.

Saturday’s dinner was a bit of a crazy experience.  I usually cook one or two dishes and that’s it.  Try making four dishes simultaneously!

I didn’t want this weekend to be purely about pasta (I still have the pasta leftover from last week).  I wanted to make a few non-pasta dishes.  This weekend, I made only one pasta dish, and I’m glad I made this one.

I started off by making the Spicy Linguine with Clams.  I was pleasantly surprised that all of the clams opened up.  That’s usually very rare when I cook for all of the shells to open up!  The more clams to eat!

I was pleasantly surprised at how light the dish was and how good this was.  I wasn’t expecting much out of it, but this makes for a perfect summer pasta dish, especially since this is a great time of year to eat clams.

{I saved all of the shells and washed them out to use for a future DIY summer project.  Most likely a photo frame project.}

Next up was the Sweet and Sour Glazed Pork Chops (Maiale in Agrodolce).  Before I had started the linguine, I had prepped the marinated chops and put them in the refrigerator.

While the recipe calls for grilling, I don’t have a grill, so I cooked them up in an iron skillet.

While I could say that these were really good on their own, what made them even better was the Mostarda di Frutta (Spicy Mustard and Fruit Preserves).  This little compote or relish was an amazing addition to these sweet and sour pork chops.  {From Sant’Ambrogio di Valpolicella}

It’s not really a mustard, nor is it overly sweet.  With the dried cherries, apricots and apples, it’s a pleasant sweet and tart addition to the dish.  It amplifies the flavors when paired with the pork chops.

After having these two together, I can’t imagine this dish without it.

I threw in some greens by adding Broccoli Strascinati (simply, broccoli with garlic and hot peppers) as a side dish.  It was a great way to round off this amazing dinner.  {From Rome}

My favorite?  I can’t pick out any one thing because they were all so uniquely interesting, flavorful and good.  I highly recommend trying all of these dishes at least once.  You will be pleasantly surprised at how good they can be.

I’m calling this a project because it took all afternoon to make this.  I’m going to let you in on a secret…it was well worth every single second.

Now, I’m not one of those that likes to buy chicken stock, especially after I learned how to make my own chicken stock.  I prefer to make my stock more ‘Asian-like’ so that if I want to make a brothlike soup later, all I have to do is add rice noodles and some vegetables.

I usually do my stock in a colander inside of a stock pot so that I can easily lift the chicken and its ingredients out of the stock pot and get straight to the broth afterward.  It’s a very efficient way to separate the ingredients from the broth.

For this stock, I added the chicken to the water, added salt, fish sauce, fresh cilantro, carrots, kaffir lime leaves, bay leaves, star anise, garlic and onions.  I don’t really measure anything.  I just throw it in there.

The reason why I’m sharing this is so you know that you don’t have to stick to the basic chicken broth recipes.  I also think that the reason why the risotto turned out so amazingly tasty has a little something to do with the chicken stock itself.

I have never had rice balls or rice fritters before.  I had no idea how they would turn out or what they would taste like.  I used this version of Venetian Rice Fritters from Saveur.  This is the recipe that instantly made me realize that Saveur was just the magazine I needed to subscribe to.  Why?  Because they understand me and my taste buds, and frankly it’s the type of recipes I want to feature on this blog.

Their recipes are a little complex and multi-faceted, like this recipe.  But the reward at the end…oh, you will never regret a second of making their dishes.

This recipe starts off by making risotto.  For those who have made risotto before, you know that this is a very time consuming process.  Risotto requires 6 cups of chicken stock, poured in at 1/2 a cup increments until the liquid evaporates.  You are constantly stirring for 40 minutes.  This isn’t the type of rice you can just walk away from.

During the last few increments of adding stock, I started to put together the filling (cheese, parsley and prosciutto).  I wanted to make sure it was ready when the risotto was done.

After I added the risotto to the mixture, stirred it up and started to prepare for the next phase (crafting them into logs on a baking sheet), I licked some of the risotto off of my fingers and stopped.

OHMIGAWD!  It was so good.

I had never made risotto before.  I stood there wondering what had taken me so long to make this.  Let’s just say the risotto almost didn’t make it to phase 2.

But I was good.  I started making the little logs and placing them on a baking sheet to put in the refrigerator.  I also put a tray in the freezer (because I didn’t have enough room in the refrigerator).  If you do make this recipe, I highly recommend placing them in the freezer.  It holds together longer when you start the third phase which is adding it to the flour, egg and breadcrumbs.

After all was said and done, I have to say that even though this process had so many steps and took all afternoon to make…it was worth every single second of it.

I realized as I was biting into the risotto and the fritters that what made these little guys so delicious is the fact that I made my stock from scratch.  I really don’t think the quality of the flavor would have been as intense if I had used store bought stock.

While some of you may think making your own stock is tedious and a pain, it’s not really.  You just throw all the ingredients in the stock pot and let it cook until the chicken is done.  Separate the colander from the stockpot…stock in one pot, chicken dinner in the other pot.

I usually just shred up the chicken and use it for other recipes (like enchiladas, soups or salads), but most times, I just shred it up, put it in a little bowl and give it to the cat.  It keeps her from trying to eat my dinner.

Making your own stock is economical.  You know what is going into your stock.  You can determine how much sodium goes into it.  You can even design it where the stock turns into a great broth for soups (the way I make my stock, the broth turns out to be the equivalent of the Pho broth thanks to the star anise).

The most important thing…making your own stock makes your food taste better.  That was the key thing about my risotto.  The chicken stock from scratch was what made this dish the best thing I have eaten in a long time.

Oh, and because this was soooo good…I didn’t make dinner.  I didn’t need dinner after this.