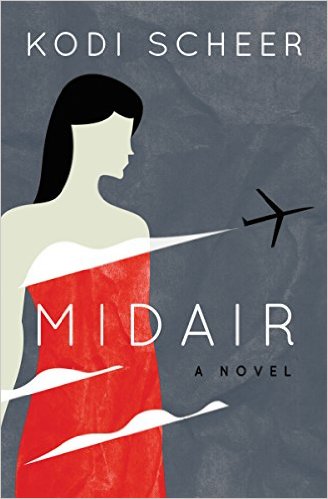 I apologize for the late selection for this month’s Kindle First selection. I celebrated my 40th birthday on July 1st and then went on vacation…just a staycation and a break from everything work related.  But enough about that…about this book.

This month’s selection is “Midair” by Kodi Scheer.

“I had a secret: I wanted to leave the earth in a spectacular fashion. Specifically, by leaping from the Eiffel Tower.” So begins this provocative coming-of-age novel about a teenage girl bent on self-destruction and revenge, set in the City of Light.

It’s the summer of 1999, the end of a millennium. In the mind of Nessa Baxter, a girl from rural Illinois, Paris is the remedy for all of her woes. The death of her beloved brother and the betrayal by her classmate Kat has left Nessa bereft and doubtful about her future. She plans to exact revenge on Kat during their renegade French Club trip. Along with classmates Whitney and Kiran, the four girls embark on a series of misadventures in Paris. As part of her plan, Nessa starts a game of Truth or Dare that spirals out of control.

A suspenseful psychological drama, Midair is the story of a young girl’s descent into darkness and the secrets we keep, even from ourselves.


So far, the reviewers are giving “Midair” 4 stars overall, which is very promising that this will be a good read.

We will have the book club on September 15th.

You can join the discussion by posting your comments below (or in the book club post thread on September 15th), on the PW Facebook page or in the GoodReads.com book club for The PW…all links are on the side.  You can also sign up for the club by entering your email address in the PW Book Club Sign Up on the right.

Looking forward to chatting about “Midair” with you in September.

We’ll be discussing “About the Night” on Friday, July 15th. I have to say, I enjoyed this book so much, I ended up ordering a physical copy to highlight the beautiful phrases throughout the book.  For those who have read the book, I hope you enjoyed it as much as I did.