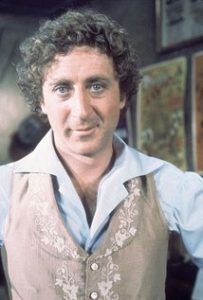 Yesterday, we lost Gene Wilder.  He was 83 years old when he passed away.

For many people, he brought laughter and many smiles that reached down deep into the very heart of mankind.  He touched our souls and filled it with happiness.  His character, Willy Wonka, became a part of that very fond story every child remembers from their childhood.

Depending on when you were born and your first Wilder movie, Blazing Saddles, Young Frankenstein, The World’s Greatest Lover, or Stir Crazy, they became the movies you fondly remember of Gene Wilder.  Whichever movie is the movie that made you laugh in wonder for the very first time, that laughter and happiness is what he carries with him as his soul goes forward.

Gene Wilder’s movies, just like Robin Williams’ movies, were very much a part of my childhood.  They created movies in a new way, creating fond memories that people still hold close to their hearts.  Gene Wilder and Richard Pryor were my modern day childhood version of Bing Crosby and Jerry Lewis and the legendary team of Abbott and Costello (and yes, I saw all of these films as a kid).

Losing Gene Wilder brings great sorrow to my heart.  I plan on binging on his movies after I finish my current binge.

[For those with DirecTV and cable, you’ll find many of his movies available for free On Demand.  Movie channels are also notorious for changing their programming to allow people to binge watch an actor’s movies after they have passed away (and on the anniversary of their death if they were popular and missed – like Robin Williams).  You can also binge watch his films on Netflix and Amazon Prime.  If you can’t find it there, dust off your library card and check the movies out for free at your local library.]

While I was walking to the library last night, I was thinking about Gene Wilder and how sad I was that he was no longer with us.   Then I heard Louis Armstrong singing “I’m in heaven.”  I could envision Wilder singing and dancing around, happy as a lamb in that tuxedo from Young Frankenstein.  It made me smile.  He’s in a very happy place, so no one should be sad for him.

On the way home from the library, I heard the song again.  Louis Armstrong and Ella Fitzgerald singing “I’m in heaven,” from “Cheek to Cheek.”  Those were the only lyrics that kept playing over and over again: “I’m in heaven.”  There were no other words from the song, just “I’m in heaven” again and again.

Knowing how strange that was and for it to happen twice, I brought it up in my meditation last night.  What was explained was this…this is how you do life correctly.  If you want to make a lasting impact on your own life and be rewarded in the afterlife, you create happiness for others.  You want people speaking wonderful things about you when you die, so give them something to be happy about.  Impact their lives with happiness.  That is the goal everyone should have: to create everlasting happiness in the world.

That is what Gene Wilder did.  In the letter his nephew wrote, he spoke of when Gene was diagnosed with Alzheimer’s Disease, he did not want the world to know so that when children would see Willy Wonka, it would not be filled with sadness when parents had to explain what had happened to him.  He wanted that pure innocence and joy of seeing Willy Wonka to be something amazing for the children and not marked with sadness by his illness.  He did not want to scar this incredible moment for the child because a parent would have to explain to them about the illness, thus creating a sad moment instead of a happy moment.

He wanted the kids to be happy when they saw him.

That is the most important thing about life: to make others happy.  Make them laugh.  Let your legacy be about the happiness you brought to others so that when it is your time to depart this life, the world will be speaking wonders of how happy you made them.

What Gene Wilder brought to the world was laughter and happiness.  That’s the way the world sent him off, with happy blessings for all of the happiness he brought to them.  That is the key ingredient to having a blissful afterlife.  Ask yourself: How did you make the world feel about your existence here?

Making People Happy Long After You Are Gone

The Moroccans tell a tale from 1927 of an American woman who loved animals. She was appalled at the working conditions of the animals there, so she created an animal hospital (called the American Fondouk (fondouk means ‘inn’)) in Fez, Morocco.  There, any working animal can be treated for its ailments for free.  For those with pets, they have to pay a fee for their care.  [Since donkeys and horses are essential to the work people do in Morocco, to lose an animal could mean loss of income.  If you can afford to have a pet, then you should be able to pay for its care.]  MORE ON THAT STORY.

It is her kindness, that decades after her death, is still remembered.  They still speak praises of her and what she did for the people there.  Her good works continue long after her passing.  Her family may have forgotten her, but the people of Morocco remember her for the good she brought to them and continues to bring to them.

You want to live life miraculously?  Make your life story about what you did for others.  Let the world remember you for the great things you did to uplift them.

For Gene Wilder, he brought the world happiness.  He left this world hearing “Somewhere Over the Rainbow.”  I’m sure he’s happily dancing and singing his way through the corridors of heaven.  The world remembers how happy he made them.  That’s the way we should all leave this world, letting the world remember how happy we made them.  Our world is better for it.  That is the obligation we owe to this gift called life.  Repay the kindness of this gift of life by doing something extraordinarily good for the world.