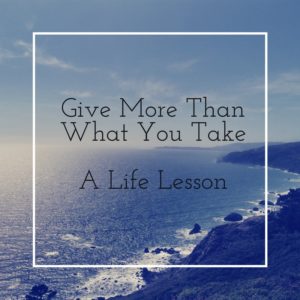 When Warren Buffett released his tax returns after the second Presidential debate, one thing stood out to me: how much he donated to charity versus how much he made in 2015.

OMAHA, Neb.–(BUSINESS WIRE)–Answering a question last night about his $916 million income tax loss carryforward in 1995, Donald Trump stated that “Warren Buffett took a massive deduction.” Mr. Trump says he knows more about taxes than any other human. He has not seen my income tax returns. But I am happy to give him the facts.

The total charitable contributions I made during the year were $2,858,057,970, of which more than $2.85 billion were not taken as deductions and never will be. Tax law properly limits charitable deductions.

My federal income tax for the year was $1,845,557. Returns for previous years are of a similar nature in respect to contributions, deductions and tax rates.

I have paid federal income tax every year since 1944, when I was 13. (Though, being a slow starter, I owed only $7 in tax that year.) I have copies of all 72 of my returns and none uses a carryforward.

Finally, I have been audited by the IRS multiple times and am currently being audited. I have no problem in releasing my tax information while under audit. Neither would Mr. Trump – at least he would have no legal problem.


Did you see how much he donated to charity? $2.85 billion.  Even more interesting is that he never claims his charitable deductions on his tax returns.

Buffett’s current net worth is $66.4 billion.  The amount he donated to charity overall in 2016 was only 4% of his overall net worth.  Even though he earned an income of $11.5 million, he still donated way more than he earned that year.  Can you imagine doing something like that?

The Key to Wealth

You see, that is one of the most valuable keys to creating wealth – to give way more than you take in.  That wealth is not limited to just money.  It is in everything we do in life.  If you give more love than you take, you will receive more love than you put out there.  If you give more food to others than what you take for yourself, you will receive a bounty of food from the most unlikely of sources.

That latter part is something I witness daily.  I give food to the homeless whenever I can.  I have way more food than I know what to do with.  I don’t expect anything in return when I give.

As a reward from the universe, neighbors knock on my door to deliver plates of food on their best china.  People pick up chocolates when they travel to give to me as a gift.  Just the other day, someone dropped off a large jug of vinegar just because I commented that I loved the salad dressing my neighbor makes.

The rewards for showing kindness, expecting nothing in return, creates even more wealth according to what you give.  That is the key to having a wealthy life.  Give way more than what you take for yourself.  Give without wanting anything in return.  In Buffett’s case, he gives way more than he makes in a year, and still continues to grow his wealth in other areas (investments, interest, etc.).

The most important thing is that he never claims those charitable acts on his tax returns, because to take a credit on your tax returns for charitable giving means that the act of giving was not so selfless.  You still got something in return for doing a good deed. That does not equate to giving without some sort of strings attached.  The universe does not reward you for those types of actions.

So the lesson learned here today is to give way more than you take in without expecting anything in return.  For those who need guidance in growing your monetary wealth this way, start by tithing 10% of your gross income to charities and those who need help.  Give selflessly.  As your wealth grows each year, donate more and more and more.  Don’t claim your charitable contributions on your tax returns.  When you have more than enough money to sustain you and your loved ones, start donating more than you take in.  This is your way of sharing the wealth and thanking the universe for the wealth it gave to you.