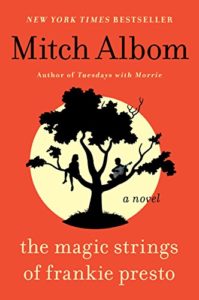 If you are looking for an incredible, well written story, look no further.  Our narrator is Music, itself, and it wants to tell the story of one of his favorite musicians, Frankie Presto.  Frankie is a bit of a magical wonder.  His beginnings are sad.  His mother died giving birth to him.  A nun pretending to be his mother couldn’t handle taking care of a baby, so she floated him down a river where a hairless dog finds him.  The dog’s owner takes the baby in and raises him as his own son.  Thinking that the boy was going blind, he thought, what kind of job could this boy have?  He thought of a blind musician he had seen years ago and decided to take the boy to him to teach him how to play the guitar.  During this time, Frankie meets a girl and falls in love, but then she disappears.  As political upheavals happen, Frankie is sent away and finds himself in America, being a roadie for some of the greats in music, learning from the best, all the while looking for the woman he thought was his mother, which ended up being someone else.  Frankie goes about his life, chasing after the girl he fell in love with, finding her and losing her over and over again.  All the while, Frankie is making legendary music for the world without even realizing it.  He doesn’t even see how his life comes full circle from his horrible beginnings to chances at making everything alright again.  Frankie Presto is some kind of wonderful…and he doesn’t even know it.

[BONUS: There is a recording of music inspired by the book.]