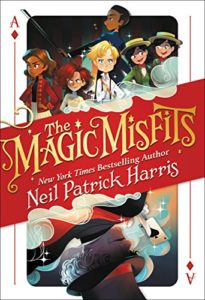 Neil Patrick Harris is releasing his first young adult book series November 21, 2017.  For those who love YA, you can get through this book in a few hours.  What I love about this story is how a young boy overcomes bad circumstances to find a family of his own.  Carter is an orphan who is sent to live with a family relative, a conman who uses magic tricks to con people.  When his guardian tries to force him to steal, he decides to do the right thing.  He returns a stolen necklace to an old lady that was kind to him and runs away from his guardian.  He stows away on a passing train, waking up in a New England town.  A carnival run by criminals happens to be in town.  Carter takes a look around, running into a real magician who sees magical potential in him.  He doesn’t believe magic is real, but he then discovers a group of young magicians who practice real magic.  Carter’s life begins to change.  Even though he is homeless and afraid to tell anyone that he has no family, this group of friends takes him in and shows him the time of his life, all the while trying to stop B.B. Bosso and his cronies from stealing a precious diamond.  If you liked the Lemony Snicket series, “A Series of Unfortunate Events,” you will like this story.  After all, it is befitting to use the Baudelaires as an example, because Neil Patrick Harris plays Count Olaf in the Netflix series.  Looks like he took some inspiration from Snicket and created a new magical world for an orphan looking for a family of his own.

[Disclosure: I received a free copy of this book from the publisher in exchange for a review.  This post contains affiliate links, which means that if you click on one of the product links, I’ll receive compensation.]