On a hot, muggy summer day in Bangkok, I crossed a bridge over a highway, following my mother and aunt to catch a bus.  Locals sold their wares along the sidewalk.  From lychee fruit to shoes, they lined up along the busy highway, selling their goods to passersby.

At this moment, my aunt believed it was time for me, at nine years old, to own my first handbag.  We walked up to a vendor who displayed purses both big and small in an ocean of colors on a large blanket.  There was only one that caught my eye.  A little thing it was, but the only one I could see in a sea of handbags.

She did not have 50 baht on her at the time.  She tried to haggle the price down, but the man saw my face and knew there was no way I was walking away without that purse.  He stood firm, “50 baht.”

My mother intervened and tried to convince me that any purse was better than that one.  I responded, “It is that one or none of them.”

She tried again, but I would not hear it.  I walked off and had the only tantrum to this day I still remember. My mother tried to go after me, but I kept walking.  I left them both behind.

Ten minutes later, my mother and aunt walk towards me with a black bag in hand.  Inside is that little red purse.  The man finally agreed to lower his price after others started chastising him for refusing to haggle.

Asking For What You Want

I should have felt guilty for what I put them through, but there was something about that cherry red purse.  This was my way of finally getting what I wanted.  Up until that moment, every time I tried to voice what I wanted, I was shot down.  So I tried to take others into consideration.  I would tell them what I wanted by guessing what they desired for me.  Instead of choosing what I really wanted, I always picked something I did not want, because I felt bad asking for anything.  Actually, I felt bad for wanting something different than what they were willing to give to me.

This was the first time I ever vocalized what I truly wanted and stood my ground.  To be told no and to pick something else, I did not want to hear it.  I had enough of it.  I felt in that moment I was asked to be truthful, and then told I could not have it.  That is a horrible thing to do to a child, especially if you know they never get what they want.  I always chose something less, instead of the only thing on the shelf I was eyeing with a fierce passion.

The Little Red Purse Grows Up

As I grew older, I cherished that little red purse, but it started to become smaller and smaller.  New bags caught my eye as my needs and desires changed.  In my twenties, I fell in love with couture and Valentino.  Seeing Valentino’s work was like being a voyeur in an orgasmic release of a man making love to the beauty of a woman and the end result was the most elaborate gowns you will ever feast your eyes upon.  That was art. 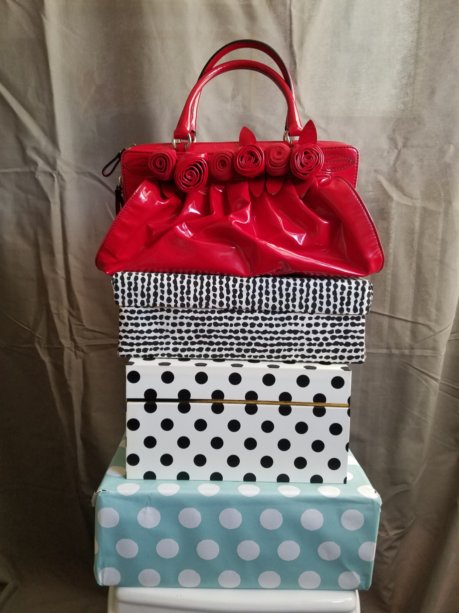 His signature color is red, just like my first handbag.  So it was only fitting that this year, as I contemplated which couture bag to add to my collection, I would stumble upon an adult version of my little red handbag.  There she was…a Valentino couture red patent leather handbag equipped with little roses, just like my first handbag.  This was the ultimate upgrade to my first, the one that started it all.

While there are women who race to purchase the rockstud collection from Valentino, I added a piece that means more to me than just a passing fad in our fast fashion world.  When I saw it, I did not look at the price tag.  I just added it to my cart.  This bag was the little red purse I outgrew so many years ago.  It had all of a sudden grown up.  A piece of my childhood resurfaced in the form of Valentino, the designer who opened my eyes to the beauty of fashion embedded in each thread and embellishment.

Over the years of collecting vintage and couture handbags, I learned the importance of choosing the right bag for my collection.  In the beginning, I bought what I could afford from each designer, instead of waiting to buy the bag I truly loved.  I found that I should always buy the one that speaks to me, the ones I fall in love with the first time I lay eyes upon it.

It is just like that little red purse from Bangkok.  It was the only one I wanted and no other handbag would do.  It was that bag or nothing.  Why?  Because just like falling in love, when you see the one you love, in that moment you’ve fallen, there is no one else in that great sea.  All you can see is that one and no one else will do.

[This post contains affiliate links. I receive commission for purchases or clicks made through links in this post.]