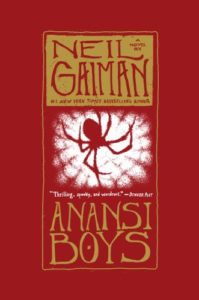 In curating my library, there is one thing that is certain, Neil Gaiman’s stories are ones that are meant to be kept in hardcover and never given away.  In his epic novel, “American Gods,” we are introduced to Anansi (the spider god).  In Anansi Boys, we are introduced to the trickster’s sons: Fat Charlie and Spider.

Fat Charlie Nancy’s life is boring.  He works a dead end job in London where the job turnover is high.  He is engaged to an incredible woman with a future mother-in-law out to get him.  When he gets news that his father has died, he returns to his childhood home in Florida to bury him.  This is when he learns he has a brother.  The old lady tells him to tell a spider that he’s looking for his brother and his brother will show up.

So what does Fat Charlie do?  He tells a spider.  When Spider arrives, he is nothing like Charlie.  He is a god, living it up and more than happy to steal the life his brother has, including his job and his girl.  So when Charlie tries to get rid of his brother, he goes to the other gods for help…ones that don’t like his father (the trickster) so well.  Some have a bone to pick and are willing to destroy the Anansi line in the process.