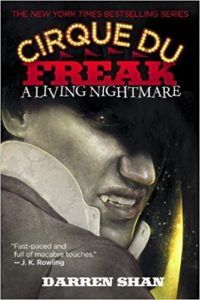 It started off as a random, yet strange collection.  I went from library book sales to second hand booksellers in search of a rather strange YA series called Cirque du Freak.  The protagonist of the story purports to be the author, Darren Shan, a young boy turned vampire.  But upon further discovery, Darren Shan is really Darren O’Shaughnessy, an Irishman living in Limerick.  He created this 12 book series as his first children’s book series, following it up with the Demonata series.  What I thought would be a series about a Circus turned into a tale not just about a circus, but about a boy who stole a spider and had to become a vampire to save his friend’s life.  He became a half vampire, an assistant to a full-fledged vampire.  They travel with the Cirque du Freak, where they are surrounded by a protective community of people that are not like anyone else.  While the movie “The Vampire’s Assistant” was a good movie, the books, as always, are way better.

In this first book, we are introduced to Darren Shan.  A normal teenage boy whose best friend is not such a good kid.  They sneak out to the Cirque du Freak one night.  Steve recognizes that one of the performers is a vampire.  After the show, he approaches Mr. Crepsley and asks to become a vampire.  Crepsley refuses because he sees the evil in Steve.  Steve, feeling dejected, vows to become a vampire hunter.

Darren, meanwhile, is looking for his friend, but stumbles upon Mr. Crepsley’s magnificent spider and decides to steal her.  This winds up being the biggest mistake he’s ever made, because it is this spider that changes his fate.