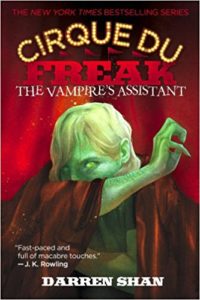 In Book 2 of the Cirque du Freak series, Darren Shan is trying to adjust to being a half-vampire (and hating every moment of it).  The thought of drinking blood sickens him.  The thought of drinking human blood repulses him.  But if he is to survive, he must eventually drink human blood or he will die.  Mr. Crepsley brings Darren to the Cirque so he can have friends, something he was missing from being alive.  At the Cirque, Darren bunks with the snake boy and they become fast friends.  They help out at the Cirque by doing chores and even feeding the Wolf Man.

One day, a young boy that lives near the camp shows up, wanting to run away with the circus.  As much as they try to scare him off, nothing works.  They also meet and befriend an activist, but things go awry when he sees the Wolf Man.  Thinking that he was a caged animal, he attempts to set him free, not knowing just how deadly that can be.