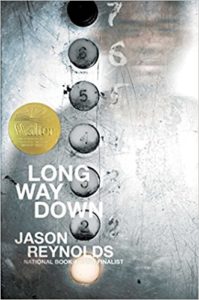 One of my favorite books of 2017.  Jason Reynolds is a master storyteller and a man of words.  “Long Way Down” may be a quick read, but the message lasts forever inside your heart.  Will’s brother was just shot and killed.  The rules of the hood (no crying, no snitching, and revenge) dictate that he must kill the person that did this to his brother.  He thinks he knows exactly who killed him, so he takes the gun his brother hid away and decides to go after the suspected killer. As he takes the elevator for the short ride down, the lift stops on every floor.  Spirits of people he knew from the past get on.  People that were shot and killed.  Friends.  Playmates.  Family.  Father.  In a matter of sixty seconds, Will has to decide if he is going to have his revenge.  The people getting on the elevator are the ones shaping his decision.

Jason Reynolds is one of the best writers I encountered in 2017.  Everything I’ve read by Reynolds so far is inspiring and very well written.  He blows my mind with his stories and the lessons he is trying to teach the younger generation.  “Long Way Down” was one of the few books I read in 2017 that made it to my curated bookshelves.  This is a story you will keep locked away in your mind thinking this man Reynolds is something else.

[I received a copy of this book from the publisher in exchange for an honest review.  This post contains affiliate links.]