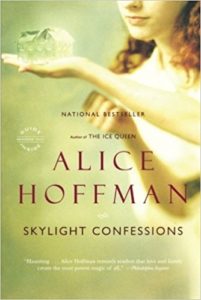 A haunting tale of love, destiny and regrets.  When Arlyn’s father dies, she decides to test fate by casting her own spell into the universe and declares that the next man that comes up the road is the man she is destined to marry.  A young man, John, shows up at her home,  lost.  He stops to ask for directions, but all of a sudden feels tired and needs to lie down.  She invites him in and he sleeps it off on the couch.  When he awakens, he finds her naked in the kitchen and their fates become intertwined.

They marry and have a son.  While the boy is attached to his mother, the father refuses to have anything to do with the child.  He regrets marrying her, thinking it was all a big mistake.

They move into the infamous glass slipper in Connecticut that was built by John’s father.  As their unhappiness grows, Arlyn begins to believe she made a mistake.  Maybe she should have waited for the next man to come up the road.  As her loneliness grows and her neighbor’s flirting with her husband increases, Arlyn turns to another man to fulfill what she is missing in her life.

After the birth of her second child, Arlyn discovers a lump in her breast.  As the years pass, the family’s pain grows and the question of whether fate led John to love Arlyn or not is answered.  There are some loves you can never let go of, no matter how much you push it away.