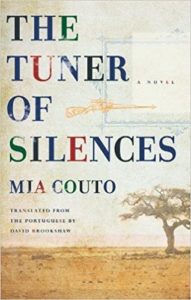 When I interviewed Kim Thúy (author of Ru and Mãn), she referenced Mia Couto’s “The Tuner of Silences” in her interview (“it feels like their organ to dream had been amputated from them.”).  I immediately ordered the book.  The only reason why is because Thúy wrote so beautifully and saw the beauty in words.  I wanted to know what inspired her phenomenal works.  This is a story of loss and pain, wandering through emptiness due to regrets and trying to live, yet not live at all because you are scared to face your truths.  You will never forget Couto’s work.

Set in an abandoned animal reserve in Africa, Mwanito lives with his father, brother and former soldier.  His uncle sometimes visits, bringing them supplies.  Mwanito grows up believing that they are the only people left in this world.  He is eleven years old before he sees a woman for the first time.

What he doesn’t know is that he is being forced to live in his father’s world…a place to forget and to be forgotten.  Why they are there is the question.  Are they in prison for something his father did? Or are they in a prison of his father’s own design?

Beautifully written.  When we are introduced to the woman, Couto’s writing changes into something much more passionate that will make you sigh at the beauty of his words.