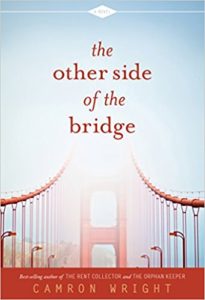 After losing his entire family in a deadly car accident, Dave Riley is lost, trying to find meaning to life itself.  On the other side of the country, Katie Connelly discovers a new story in the building of the Golden Gate Bridge.  Both people are suffering from the loss of family member(s).  Before Dave’s wife died, he revealed to her that his dream was to ride a motorcycle cross country to the Golden Gate Bridge.  She thought it was hilarious.  But as his birthday approached, she decided to buy him a motorcycle jacket…a jacket she would never be able to give to him.  When Dave finds the jacket, he believes it is a sign.  His marketing firm is being offered a chance to represent a motorcycle company in their next ad campaign.  Dave sees this as another sign and tries to come back out of his funk to take on the account…even if that means dropping everything, getting on a bike and heading from NYC to the Golden Gate Bridge.  What he finds along the way is not what he expected.  But isn’t that true of any journey we embark upon?  How these two lives intersect…you will never guess the outcome.  [Review]

[I received a copy of this book from the publisher in exchange for an honest review. This post contains affiliate links.]