Sponsored Post.  I was asked by RawSpiceBar to develop a new recipe using their Apple Pie Spices mix.  While most would instantly think of a dessert, I knew that would not work for me.  I am not the kind of person that usually makes desserts.  So I thought about it and came up with Apple Spiced Ham.

My logic was if we can put pineapple on ham, then we should be able to use apples!  And boy, was I right about that.

The result? This is by far the best ham I have ever had.  And the apple gravy…*eyes rolling into the back of my head*…was so good it needs to be bottled up and sold in markets everywhere.

Since this is also apple season, this recipe works perfectly for the time of year.  When choosing apples, make sure to use apples that will hold up while cooking.  I used Granny Smith and Empire apples.  Other apples that work well: Golden Delicious and McIntosh.

The key ingredient here that you cannot skip is the Apple Pie Spices mix from RawSpiceBar.  This is one of the most important ingredients in the entire recipe.  This is what adds the extra oompf to the entire dish, making the ham and the gravy go the extra mile.

For those who end up with leftovers, I recommend using this in every leftover ham recipe you can think of…including the apples.  I added the ham and apples to bean soup, pastas, scrambled eggs…and to tell you the truth, I never knew the apples were there.

I hope you enjoy this recipe as much as I did.  Let me know in the comments if you tried this and what you thought of it. 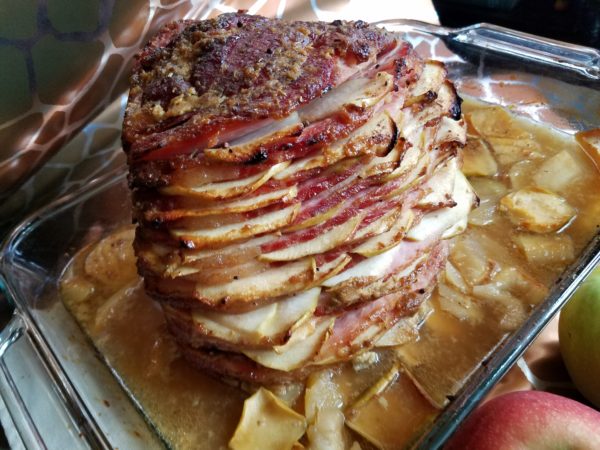