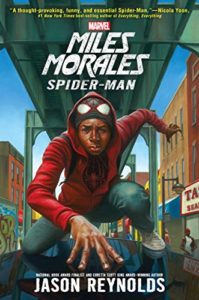 This book is due to be released on August 1, 2017.  This is by far one of the best stories I’ve read this year.  I gave it 5 stars because this is more than just a Spider-Man story.  This is about a kid facing adversity, just like every other kid out there.  He may have super powers, but it does not mean that he is not a victim of society.  He is learning how to be a hero, not just a superhero fighting super villains.  Jason Reynolds is an excellent writer.  The story is absolutely incredible.  I had a hard time putting the book down.  I couldn’t wait to get back to reading it again.  This is a must read for everyone.  Get this book for your kids.  Read it yourself.  I don’t like Spider-Man, but I do love Miles Morales.  Excellent read. [PW REVIEW]

There are very few books I cross paths with that make me very excited to share with everyone.  For Jason Reynolds’ upcoming release “Miles Morales,” I can’t wait for all of you to read this book.

Yes, this is a Spider-Man novel.  Forget Peter Parker, this story is about Miles Morales, a mixed race kid from Brooklyn going to a posh boarding school in Brooklyn on scholarship.  He is a genius with a 4.0 GPA, so smart, the neighborhood speaks of him with pride.  What makes this story unique though, is that this is about rising from adversity and becoming a better person.

Miles is from a poor family.  His dad’s past is that of a common criminal, along with his uncle.  They start off doing a lot of bad things as teens, because they feel like they have no choice.  If they are going to survive, they need to steal and make fast money.

Then one day, Miles’s dad meets a beautiful woman, falls in love and leaves that world of crime for something better.  He wants to have a family that does not need to resort to crime to survive.  They are trying to give Miles a better option in life.

Leaving crime, though, means disowning a brother.  But that doesn’t stop Miles.  He sneaks out to see his uncle, because that’s what you do for family.  During one of those visits, he is bit by a spider, just like Peter Parker.

Going to school has its own challenges.  He works hard at his grades, trying to maintain his 4.0 GPA. He has a work study to help cover the room and board at the school.  He tries so hard to do everything right, but society tries to push him back down.

His history teacher, Mr. Chamberlain, has his own opinions on blacks and slavery.  They are very backwards ideologies.  He makes each teaching lesson a lesson on the importance of black people remaining slaves.  He believes they need to stay within their element and not try to rise above (i.e. go to an elite boarding school).

These lessons disturb the students, but they just put it off as crazy Mr. Chamberlain.  Ironically though, Miles’s spidey sense goes off every single time he is in this class.  Thinking someone outside needs to be saved, he runs out of the classroom (saying he needs to go to the bathroom, which Chamberlain denies) only to find nothing at all.  He ends up getting suspended from school for a week.

He leaves his work study to show up at an open mic night to get extra credit for one of his classes (and pass a poem to a girl he’s crushing on), only to discover the next morning that cans of sausages were stolen during his shift.  Something like this could lead to his expulsion, because they assume he took it because he’s 1) black and 2) poor.  He doesn’t even like canned sausages. 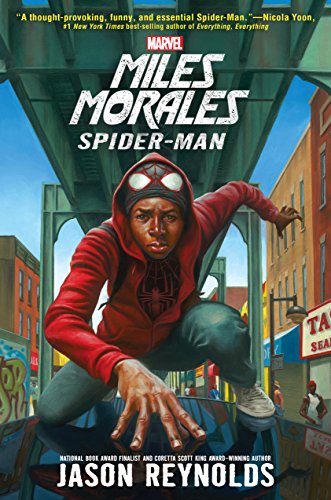 His father is trying to teach him how to grow up to be a hero to his community first.  When he comes up against all of these problems both at school and in his neighborhood, the question becomes what type of person will he be.  Will he turn bad or good in the end?

This book is mainly about the challenges many people face across America.  It is about learning how to be a hero, no matter who you are or where you are from.  You do not necessarily have to be a superhero with powers in order to be a hero.  Sometimes just helping out your community, picking up trash, and helping your neighbors is part of being a hero.  You are helping someone else that needs help.  That is what heroes do.

But what is a Spider-Man story without evil villains out to destroy the world?  Oh, there are a few bad guys in this book that leads to an epic fight scene in the end.  So do not go into this thinking this is just about evil super villains, because this book is more than that.  This book is truly about a boy learning how to be a hero with and without his powers.

The message in the end is that “We can all be heroes.”

I give this book 5 stars, because it is so well written and a tremendously awesome story.  I was so absorbed in the story, I couldn’t stop reading it (and this was while I was doing a Game of Thrones binge).

The story is more than just the regular superhero story.  It is a story about a kid trying to be a hero when the world keeps trying to stop him.  It’s hard for a lot of kids to go up against a system that wants to see them fail.  Miles Morales is one of those kids.

Just because he’s Spider-Man, it doesn’t mean that he’s not faced with personal challenges that are similar to so many kids out there.  He is victimized because of his race and his socio-economic class.  There are people that want kids like Miles to fail because they are black or from a bad neighborhood or from a parent that is a known criminal.

His family may struggle, but his father, that known criminal, is trying hard to make sure his son doesn’t turn out like he did.  He changes his life around so that Miles can have a better opportunity.  Miles deserves a chance to be the change.

What I love about this story is that Reynolds is teaching kids that they can all be heroes.  It starts in your own neighborhood.  Little things like helping the elderly, cleaning up the streets, or helping your neighbors can result in a positive change in our communities.

Reynolds doesn’t shun the stories of people living in their cars or kids being falsely arrested for crimes they did not commit.  This is the reality in our world.  Having a family member in jail, visiting them in a detention facility and trying to be a family are all part of the story many kids experience.

The author brings the realities around us into this story.  Even superheroes can experience the same adversity as the kid that picks up this book.  What Reynolds is saying to these kids…YOU’RE NOT ALONE.

In conclusion, I cannot begin to express how much I absolutely love this book.  I do not even like Spider-Man.  I am a Superman kind of girl.  This story though made me into a Miles Morales fan.

This is an excellent story that should be on everyone’s must read list this year.