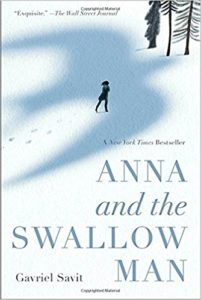 When I started reading this book, it reminded me a lot of “The Book Thief.”  I read the letter from the publisher and understood why.  The editor for “Anna and the Swallow Man” is the same person that edited “The Book Thief.”  What did that tell me?  I was in for a heartbreaking, but incredible story about World War II.

It’s 1939 in Kraków, Poland.  Anna’s father is a linguistics professor who’s taught his daughter how to speak several languages fluently (like a native).  These skills are all that he passes on before all of the intellectuals are purged from Poland.

Anna’s father leaves her with the local pharmacist one day, but never comes back.  The pharmacist does not know what to do, so he tries to send her back home.  But the doors are locked and her father is nowhere to be seen.  She goes back to the pharmacy and sits outside, waiting for her father.  That is when the Swallow Man appears.

He is a unique man.  The birds are his friends.  When he calls a swallow to him to keep Anna from crying, she is entertained and enthralled.  He leaves her with a bit of advice to keep her alive and out of sight, but her intrigue of the Swallow Man leads her to follow him into the wilderness where she not only saves him, but they save each other.

Over the next few years, Anna and the Swallow Man walk all over, living in the woods.  As the war deepens, they find themselves in the crosshairs of a battlefield where they must learn to survive among the dead with the enemies on all sides, and people that will turn them in if they only knew who the Swallow Man was and just how dangerous he was.

[I received a copy of this book from the publisher in exchange for an honest review.  This post contains affiliate links.] 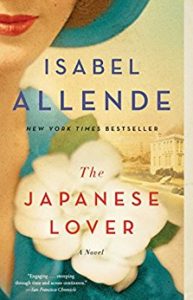 At the end of every year, Isabel Allende knows what she will write about when she begins her writing season.  It was closing in on December 31st when she was out with a friend, walking around in Brooklyn when her friend was telling her about her mother and her Japanese gardener.  They had been friends for over 40 years.  Isabel responded, “They were lovers.”  The friend taken aback, laughed and said, “No, they were just friends!”  Isabel said she could not imagine being friends with a man for 40 years and never sleep with him once.  Thus, the inspiration for the tale of “The Japanese Lover.”  Allende is a passionate woman and she brings that to her writing.  The book is well written and a beautiful story set in the present day and during World War II when the Japanese internment camps took many Japanese families away from the lives they built.  The book also dives into a time when races were not mixed.  A must read.

[Disclosure: I received a free copy of this book from the publisher in exchange for a review.  This post contains affiliate links, which means that if you click on one of the product links, I’ll receive compensation.]

This book is a war fiction novel that takes place during World War II. Here’s the Amazon blurb:

In 1958, a diary is found in a cave on the small Japanese island of Hatoma. Alongside it are the remains of three people.

The journal reveals the story of Hiromi, a sixteen-year-old girl who’d grown up in the United States before living in Japan in the midst of World War II. One day, while collecting star sand—tiny star-shaped fossils—Hiromi finds two army deserters hiding in the seaside cavern—one American, one Japanese. The soldiers don’t speak the same language, but they’ve reached an agreement based on a shared hope: to cause no more harm and survive. Hiromi resolves to care for the men—feeding them and nursing their ailments—despite the risk that, if caught, she’ll die alongside them as a traitor. But when a fourth person joins in on their secret, they must face a threat from within. The diary abruptly ends, leaving everyone’s fate a mystery.

Decades later, in 2011, a young female university student decides to finally determine who died in that cave and who lived. Her search will lead her to the lone survivor—and bring closure to a gripping tale of heroism at a time when committing to peace was the most dangerous act of all.

Not an Amazon Prime member?  You can join by clicking on the ad below.

If you have any thoughts or questions you’d like to post for the discussion, feel free to leave the question/comment below or on the Facebook page.